Organized by the Italian Ministry of Health, the ERN Info Day’ was held in Rome (Italy) on October 16th, 2017. 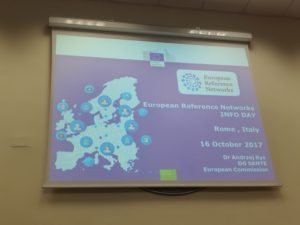 This meeting was aimed to create collaboration among the Italian HCPs involved in the European Reference Networks (ERN), that as highlighted by Andrzej Jan Rys (Director HelathSystems, Medical Products and Innovation, DG Sante’) are virtual networks of specialists officially born in March 2017, dedicated to the diagnosis and treatment of diseases complex or rare. The 24 ERNs so far approved cover all major disease groups and represent almost a thousand of multidisciplinary medical teams of more than 300 hospitals, located in 25 EU Member States and Norway.

During the opening session the Italian Minister of Health, Beatrice Lorenzin, underlined the huge sense of  solitude  and loneliness that commonly affects patients with rare diseases and stressed the important role of ERNs in intercepting, helping and taking care of these patients and their families. 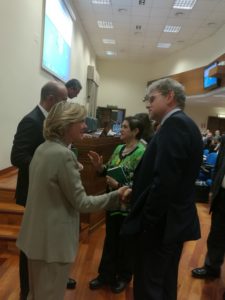 Thanks to a close contact with regulatory authorities, key opinion leaders, patient advocacy organizations. and non-traditional players, like technology companies, ERNs can create a new coordinated way to manage patients affected by rare diseases and optimize access to diagnosis and therapy. This will have a strong Impact on the National Health System in terms of sparing resources, optimizing services and avoiding waste of expertise.

The first six months of ERNs activity were then presented showing how Italy plays a leading role with two specific ERN that have been deeply presented by the related Coordinators:

Moreover the key role of Prof Maurizio Scarpa (Coordinator of the ERN for Inherited Metabolic diseases and chair of the Board of ERN Coordinators) in further contributing to the increment of the Italian prestige inside the ERNs was highlighted.

ERNs constitute the most far-reaching clinical project in Europe. They are not a project or a program, they are a “CONCEPT” and represent  the major achievement of the European spirit of collaboration, sharing and health investment in the field of rare diseases. In particular, as stated by Prof Maurizio Scarpa, ERNs are not single networks, but rather a critical mass of about 300 hospitals and over 1000 specialised units, cross feeding each other to meet the needs of patients. 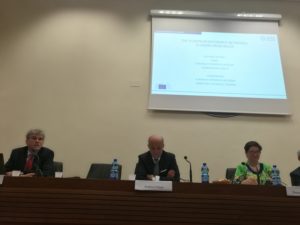 The role of the ERN Coordinators Group as an invaluable instrument for the EC/ National Health Systems/National Plans for Rare Diseases for the definition of a uniform pan-European plan for rare diseases was highlighted.

Prof Scarpa then described the challenges for the future mainly consisting in:

As laid down in Article 12 of the Directive on the application of patients’ rights in cross-border healthcare, registries constitute one of the important objectives of the European Reference Networks (ERNs) to be set up. Also in this regard Italy has given an enormous contribution, as illustrated by Prof Domenica Taruscio (National Center for Rare Diseases, National Institute of Health), thanks to the establishment of the national Rare Disease registry of the Superior Health Institute and regional registries, tools that have allowed the creation of a national monitoring system for the surveillance of rare diseases and the analysis of the flows of patients and health care facilities. Such systems are designed to ensure maximum simplicity for patients who are forced to deal with several specialists and thanks to the integration of the common virtual counselling electronic platform a coherent framework for data sharing, second opinion and the creation of cross-border multidisciplinary teams is provided. This system allows to ensure better performance for a better quality of life for patients and at at the same time lower healthcare costs as highlighted by Paola Facchin (Interregional Table for Rare Diseases) who highlighted the importance of the support provided by the Ministry of Health to the Italian Centers in entering in the European context. Claudio Ales (UNIAMO FIMR onlus) recalled the importance of the patient’s contribution to this infrastructure and underlined the importance of having the different players working together in synergy, enhancing a better future for all the patients suffering from rare diseases.

CONTRIBUTIONS FROM ITALIAN PUBLIC INSTITUTIONS DURING 2021

Dear All, as you know, due to the evolving public health risk associated with the outbreak of the Coronavirus, the B4B workshop planned for  6-8 March, 2020 was…
FOCUS ON