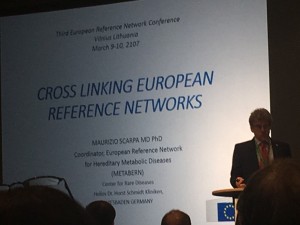 24 European Reference Networks (ERNs) were formally launched on 9 March 2017. Representatives from the networks and Member States, along with patients and policymakers, gathered in Vilnius, Lithuania, for the 3rd ERN Conference and kick-off meetings (9 & 10 March).

Maurizio Scarpa, Coordinator of the European Reference Network for Hereditary Metabolic Diseases (MetabERN) discussed how ERNs could be cross-linked. The biggest challenges for many rare diseases is securing a diagnosis. For some conditions, it can take an average of 43,800 hours before a diagnosis is found. While the 24 ERNs are organised in a manner designed to reflect how medical specialties are grouped, many patients will require input from several 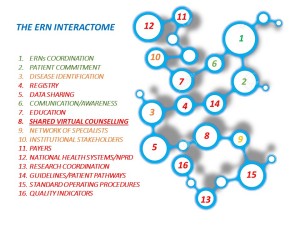 ERNs. “There is crosslinking in nature,” said Dr Scarpa. “Nothing is isolated.” He said ERNs should be at the frontier of ‘network medicine’ – a new way of thinking of health which breaks down silos between disciplines and disease taxonomies. Tools must be developed to link the ERNs, including a shared virtual counselling system that allowed members of different ERNs to discuss complex cases. “ERNs are not a project or a programme they are a concept – a revolution in the understanding of rare diseases,” he said. “Don’t think of ERNs as discrete networks but as a large task force for sharing expertise.”

Full report of the Conference available at https://ec.europa.eu/health/sites/health/files/ern/docs/ev_20170309_frep_en.pdf